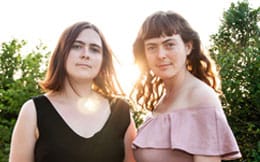 Over the last three years the pair have toured extensively, bringing their unique contemporary twist on folk music to audiences in Australia, North America, the UK and Ireland; most recently performing at the legendary Telluride Festival in Colorado.

“The Mae Trio songs are powerful, the vocal harmonies soar, and their own instrumental prowess is impressive” Penguin Eggs